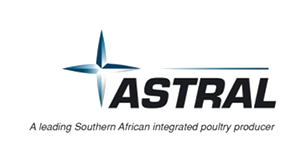 RollupSheets has been used by the Astral Foods group of companies since the listing of Astral Foods Ltd on the Johannesburg Stock Exchange in 2001.

Initially the program was used to consolidate monthly management accounts and for consolidation of the year-end statutory financial reporting.  It has since been expanded to report and consolidate group budgets, weekly profit reporting, annual strategic plan forecasts, internal control ratings and the consolidation of Income Tax returns.

An outstanding feature of the program is the ability to consolidate whatever data is, or can be imported in MS Excel format.  It offers a secure environment where the format of reporting can be controlled and updated from the centre. These features allowed Astral to employ the minimum resources at the head office for group reporting purposes.

Support from the RollupSheetsTeam was outstanding and very reliable from the initial implementation of the program, including installing upgrades and assistance in expanding it to other reporting structures.

I will not hesitate to recommend RollupSheets be considered as a solution where data had to be reported or consolidated to a central reporting office.

HOW DO YOU RATE AS A FINANCIAL EXECUTIVE?

Rate your reporting efficiency score and then put us to the test to experience our guarantee of fixed-scope, fixed-time, fixed-cost for your statutory, budgeting, forecasting, monthly, cash management or tax reporting.

What is your Financial Reporting Efficiency Score (“FRES”) ?

Your "FRES" Score = 0
Based on your FRES result, you appear to have your financial reporting under control with the appropriate systems. If you have any queries, please feel free to contact us
Based on your FRES result, there appears to be some discrepancies in your financial consolidation and reporting, it may be advisable to contact us to resolve these matters. Complete the requirement fit and we'll be in touch.

+ Click here to complete the Requirement Fit
Based on your FRES result, you are in need of a more comprehensive, simplified financial reporting system and process, we can assist you in achieving this, complete the requirement fit and we'll be in touch.

But just how efficient are you really?

These 8 questions could change your financial reporting paradigm:

Welcome to our automated, no-nonsense, no obligation solution to providing you with an implementation estimate for your unique financial reporting and consolidation requirements. The estimate will be mailed to you immediately and is our guarantee to fulfil on a fixed-scope, fixed-time, fixed-cost basis.

Take a minute to complete the beneath fields.

Put us to the test and experience how we simplify your statutory, budgeting, forecasting, monthly, cash management or tax reporting.